Children and adolescents are among the most vulnerable populations in Kenya to HIV. Kisii County is estimated to have the sixth-largest number of people living with HIV (PLHIV) among Kenyan counties. Per the 2018 Kenya HIV estimate, Kisii County has an estimated population of 37,873 PLHIV, and 2,923 of them (7.7%) are children under 15 years old.

Across all populations, Kenya has an estimated viral load coverage of over 60% as of September 2018. This rate is higher among children (72.4%) and adolescent (72.3%) populations.

The viral suppression rate across all populations in Kenya is around 85% as of September 2018. Within Kisii County, adult viral suppression is even higher at 94% compared to children at 83.3% and adolescents at 80.6%.

Within Kisii County in Marani Sub-county, 90% of the total adult clients were virally suppressed by October 2017, while only 72% of the pediatric clients were suppressed. Twenty-four out of 82 children receiving care at Marani Sub-county Hospital, a level four healthcare facility in the county, had a viral load of over 1000 copies/mL.

To ensure HIV epidemic control, there is a need for targeted strategies among non-suppressing populations with an emphasis on children and adolescents. At the Marani facility, the staff set a goal of improving viral suppression among adolescents and children aged 0-19 years from a baseline of 72% to 90% over a 12-month period.

Relevant indicators are tracked and reviewed over time to evaluate the impact of the STOC. Marani Sub-county Hospital conducted a root cause analysis for sub-optimal HIV viral suppression among the children and adolescents under 19 years old.

The hospital identified the major cause – unstable caregivers – and the facility MDT came up with a solution of surrogate caregivers. After implementing this STOC, the MDT noticed significant improvements over time. Viral suppression among children and adolescents increased from 72% to 95%.

The overall goals of the project were:

The facility QIT, through the MDT, profiled the 24 children with high viral load counts to determine the factors affecting their adherence. Of these children, 16 (67%) did not have a stable caregiver, and of these 16, nine (56%) were orphans.

The hospital took a case management approach to offer differentiated care to the children — an approach that involved allocating a surrogate caregiver. A surrogate caregiver is an adult client who has achieved viral suppression and comes from the same village as the group of non-virally suppressed children; surrogates are also willing to provide care and support in the absence of a functional primary caregiver. Their role as a case manager was to ensure the child takes medication, keeps clinic appointments, attends support groups, and eventually virally suppressed. The surrogate caregiver and a peer counselor also conducted home visits and reported any social issues affecting the child’s adherence that were barriers, so that the facility’s longitudinal care team could intervene appropriately.

The team at the facility offered the following interventions:

Structured home visits were conducted by the surrogate caregiver and peer counselor. Data was reviewed periodically over time to determine whether the intervention led to any improvement. 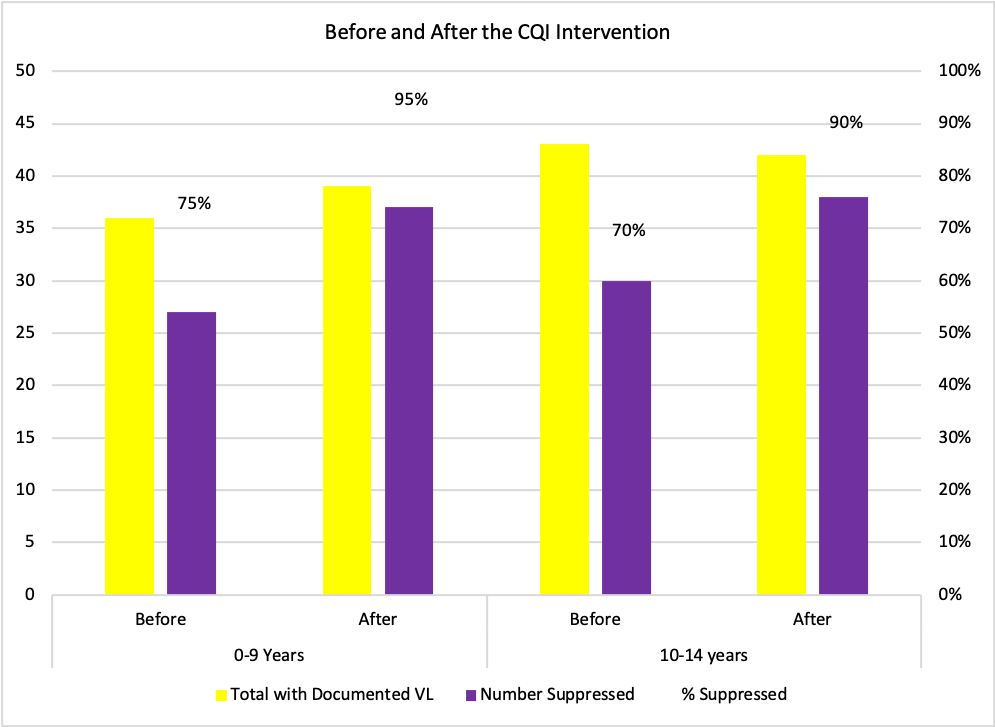 One of the challenges that arose was disclosures for children aged 10 to 12 years; however, caregiver literacy sessions discussed ways to support disclosure. At the facility level, staff tracked and followed up using run charts, a viremia register, and a viral load log book.

The results have been sustained over time with viral suppression rates among children and adolescents above 95%. Several factors led to the success of the intervention, including:

Analyzing the barriers for specialized interventions among clients with high viral load is critical. Orphaned children face many challenges with caregivers, but if they are supported, they can do well. Surrogate guardianship as a form of case management appears to work for children with unstable caregivers.

Understanding individualized adolescent and pediatric barriers helps to inform the interventions needed to achieve the desired outcomes. Community support is crucial in holistic HIV care management. Caregiver education plays a role in the pediatric treatment outcome. It is also important to involve children and adolescents in their own health management as soon as they understand their status.

A facility-specific CQI infrastructure, via MDTs that support data use for support site-specific interventions, can lead to significant improvements. Working under the umbrella of a county quality management framework ensures that facilities can establish CQI principles to address their individual challenges.

This Marani Sub-county Hospital was recognized by Kisii County for its achievements and received an award as a top performer. The hospital was also named the second runners-up in the category of Health Facility Innovation Project of the Year at the 2019 Quality Healthcare Kenya Awards.